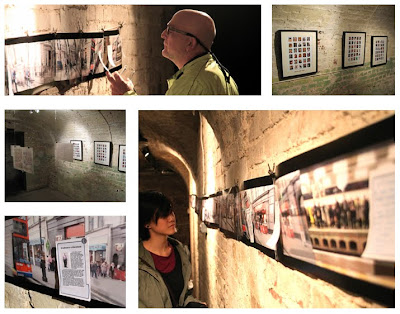 Shangyi Xie was recently featured at Creative [SIN]ergy's group show called Uniquely Singapore? a generi-City project. The exhibition was part of the London Design Festival and was held at the Crypt Gallery on Euston Road from 16 to 19 September 2010.

WHO IS MORE TOM, DICK & HARRY? (2009) by SHANGYI XIE
C-prints on Photo-paper, 3 Panels of 40 x 50cm
A name has always been something given to a person from birth and this identification is held for life for individuals, with preconceptions and impressions attached. However, when there is more than one person sharing the same name, the impression of a name might change, then gradually the confusion sets in: Who looks more like a “Tom”? Who Is More “Harry”? What happens when name becomes a common denominator?
Nonetheless, judging people and forming impressions is a norm; everyone is guilty of that. In this work, 30 photos depicting those with names of Tom, Dick and Harry are aligned in a yearbook format, framed, and put under the scrutiny of the audience, providing a platform to form impressions on these strangers without feeling guilty, like in a television game show. Furthermore, as the title suggests, the audience becomes judges and tasked with deciding who is MORE who in their definition, as if given the ability to vote someone out. Yet, by generalising them as “Tom, Dick and Harry”, no one in particular is being referred to, and this turns them to just nobody.
ON THE STREETS (2010) by SHANGYI XIE
4mins 51sec Video (Supermario Game Audio)
Panels of Video stills with stick on post-its 30 x 420cm
Extending from the video Who are you, On the Streets allows the audience to join in and write down their thoughts on post-its and form narratives on these video stills of street scenes. Some of the post-its narratives are taken off the tabloid news and juxtaposed beside these characters in the stills, instilling confusion between fiction and truth.
Hence, these people on the streets become helpless characters that take on the identity the viewer have created for them while they try to interpret their life. Such behaviours of tagging narratives beside the characters also seems to be playing the role of God, having everyone within your control in your imagination, mimicking computer gamers controlling their avatars. Made to form judgments and narratives from merely pictures, the work further resembles the tabloid characteristic where gossips are churned out; It is this ambiguity of taking things to be facts or fantasy that make this work interesting.
Re-Inhabiting the City by SHANGYI XIE
How Much Mistakes Can Be Made In A Day, 2010
10 X A4 paper (framed)
After leaving Singapore for a year of so, I realize how much I miss Singapore. I miss the food, miss the warmth, miss the hustle and bustle of the city, miss the people, but what I miss most was the language. The familiarity I got hearing a Singaporean speaks- the tone, the pace, the accent- can never be replaced, it is so unique and identifiable. However in other people’s ears, even in the opinion of our own rulers, this language is considered to be coarse and unpresentable.
My work, titled How Much Mistakes Can Be Made In A Day, follows and records a day of my life where every word I spoke for the day is documented and transcribed onto paper. Having a recorder placed on me may have raise awareness of my own speech, but having the need to communicate in my social circle, it is quite a good representation of the way I talk. After putting it down on paper, the mistakes (be it grammatical, pronunciation or sentence structure) will be highlighted in red and corrected, resembling a marked examination paper.
Singapore being a meritocracy society tolerates very little mistakes, my work aims to challenge this mindset in exploring just how much mistakes we unforgiving Singaporeans ourselves can make in a day just in our own speech. It also touches on the strict censorship issues Singapore impose be it self-inspection or on media. How freely will you speak if you know your every word is being recorded?
The exhibition also featured other works from the diverse creative industries of UK based Singaporeans.