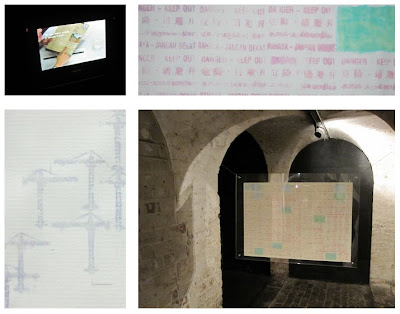 Karen Yeh was recently featured at Creative [SIN]ergy's group show called Uniquely Singapore? a generi-City project. The exhibition was part of the London Design Festival and was held at the Crypt Gallery on Euston Road from 16 to 19 September 2010.

DANGER, DELETE (2010) by KAREN YEH
Ink on paper (50cm x 70cm)
The motif of “Danger-Keep Out” sign pervades in this piece. The signs are a familiar sight in construction sites in Singapore, unique for their four languages of communication. With the city ceaselessly reinventing itself, construction sites and the “Danger-Keep Out” signs pervade public spaces. Is the city in need of more inert places of memories for its people, instead of the sustaining image of the construction site? What are some of the dangers that are congruent with a persistently young and always developing city?
SINGAPORE NODLES (2010) by KAREN YEH
Video, 10’’
What is this Singapore noodles that Singaporeans do not know of, but the foreigners in London know so well?
The basis upon which Singapore Noodles is named is not based on it being a popular or national dish of Singapore. Nor does it seem to have its origins in Singapore. What is this origin then? Different people remember the history of the dish differently. Which one is true? To what extent is one culture’s representation of another valid?
A work that explores issues surrounding national identity, globalisation and the rituals of eating.
SKYLINE (2010) by KAREN YEH
Ink on paper (50cm x 70cm)
The skyline of Singapore is continually changing with architectural trophies erected one after another. This work traces what used to be the iconic skyline of Singapore in the 1980s and early 1990s—the Central Business District area overlooking the Singapore River. In the present day, there are various skylines competing to be iconic of the modern cityscape. Is the iconic skyline that which encompasses the Esplanade, Marina Bay Sands or the Singapore Flyer? While the skyline is constantly being redefined, the only enduring image is perhaps the numerous construction cranes that overlook and transform it.
The exhibition also featured other works from the diverse creative industries of UK based Singaporeans.