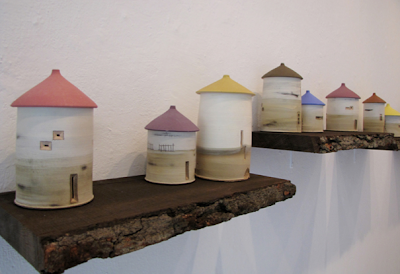 Hong-Ling Wee is a scientist-turned-artist who realized her passion for ceramics during her pursuit of a ph.D. in geography. since completing her doctoral degree in 2005, she has been a full-time ceramicist who splits her time between the united states and Asia.

Wee has participated in numerous exhibitions all over the united states, Australia, Japan, Korea, China and Singapore. Among her accolades include the First prize at “Ceramics Biennial 2006” at The New Hampshire Institute of Art (new hampshire, USA), an Award of Excellence at the 3rd China-ASEAN Youth Creativity Competition at the Guangxi National Art Center (Nanning, China), an Honorable Mention at the Cheongju International Craft Biennale (Cheongju-si, Korea). In 2006, she was also selected as one of twenty-four Emerging Artists by Ceramics Monthly. Most recently, she received grants for this solo exhibition from the Singapore Permanent Mission to the United Nations (New York), the Singapore International Foundation and the national Arts Council (Singapore).

Wee’s work has been also featured in the straits times, the business times, Singapore (SIF Magazine), nu you, Millionaire Singapore, Ceramics Monthly, Clay Times, Sing Tao Daily, Ming Pao Daily news and the world Journal. she was also featured in the beyond the Dot documentary series that aired on channel news Asia in 2007.


Creative [SIN]ergy presents, PUSH! (Pop-Up Singapore House). A non-profit project in association with RSP Planet Design Studios, working in partnership with FARM and Platform 65 and supported by Singapore International Foundation. PUSH! presents an exciting summer of events, exhibitions, and workshops. Showcasing some of the best Singaporean talents from a diverse range of backgrounds including Visual, Literary, Theatrical, Design and Culinary Arts from around the globe in London.