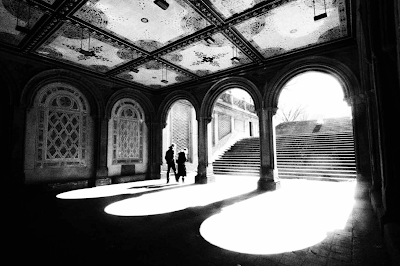 Lay Bee Yap is trained as an architect-urban designer, and is currently working in Singapore. Her photographic journey is to explore and capture the life and flow of the city: its cityscape, buildings and spaces with play of lights, shadows, and intriguing sense of place. in each photograph, she wishes to capture an impression that could not be seen without the use of her camera. Hence, through the work, she strives to accentuate the lines, abstractness, fluidity and geometry of spaces. these photo- graphs are her storybook of the City.

Lay Bee Yap was born in 1974 and has lived in Singapore, London and new york. bee is trained as an architect-urban designer, and is currently working in Singapore. She studied architecture at the Bartlett School in London from 1993-99 and has just graduated with a Master of Science in Architecture and Urban Design from Columbia University in the city of new york where she has been living in the past two years. She is a recipient of the Lucille Smyser Lowenfish Memorial Prize and the William Kinne Fellows Prize 2011 at Columbia.

Over recent years, she has developed a special interest in photographing the city-scapes, architectural spaces and the environment of the different cities and places she has visited.

Creative [SIN]ergy presents, PUSH! (Pop-Up Singapore House). A non-profit project in association with RSP Planet Design Studios, working in partnership with FARM and Platform 65 and supported by Singapore International Foundation. PUSH! presents an exciting summer of events, exhibitions, and workshops. Showcasing some of the best Singaporean talents from a diverse range of backgrounds including Visual, Literary, Theatrical, Design and Culinary Arts from around the globe in London.
Posted by creative [SIN]ergy at 19:52