Here Premieres in London at [SIN]efest 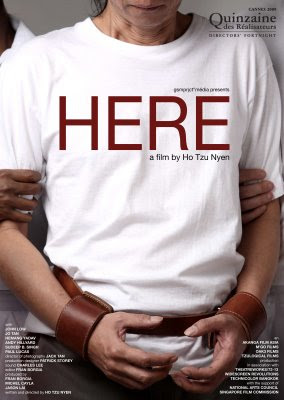 HERE is a made-in-Singapore film, produced by an international team, from Spain, Canada and Singapore. It is the debut feature film of Ho Tzu Nyen, who wrote and directed it. Set in a disused mental hospital in Singapore, HERE is a story about love and the love of fate.

A television switches on. A mind snaps. A man discovers his murdered wife. As he stares at her lifeless body, the events leading to her death play before him, like in a movie. HERE follows the journey of He Zhiyuan, a middle-aged man who struggles to make sense of his reality. Reeling from the sudden death of his wife, he loses the will to speak and is interned at Island Hospital. There, he meets strident kleptomaniac Beatrice with whom he forms an inexplicable bond. As He adjusts to life within, he is selected for an experimental treatment, which forces him to confront the devastating truth behind his past, present, and future. Meanwhile, a filmmaker visits Island Hospital to document the lives of the staff and patients.