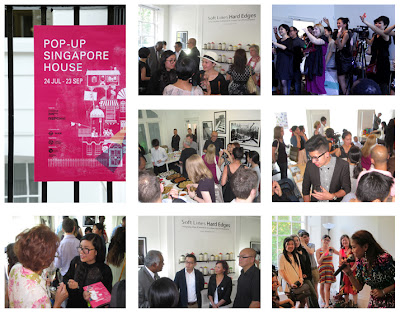 24th July 2012 saw the opening night of PUSH! (Pop-Up Singapore House) a non-profit project . After nearly a year of planning and preparations, the doors finally opened at a listed Georgian Townhouse on Dorset Square.

PUSH! presents an exciting summer of events, exhibitions, and workshops. Showcasing some of the best Singaporean talents from a diverse range of backgrounds including Visual, Literary, Theatrical, Design and Culinary Arts from around the globe in London.

PUSH! is presented by Creative [SIN]ergy in association with RSP Planet Design Studios, working in partnership with FARM and Platform 65 and supported by The Singapore High Commission in London, Overseas Singaporean and The Singapore International Foundation.
The opening night started with a private view of ceramics artist Wee Hong-Ling and photographer Yap Lay-Bee’s exhibit Soft Lines, Hard Edges, and light and laser artist Iyvone Khoo’s Celerity in the lower gallery floor.

In the upper gallery, Iyvone Khoo screened her award winning The Moth Catcher that was recently awarded Finalist in Singapore Shorts, short film category. The Pop-Up Shop was also open, with items on display in a lovely white bookshelf. The Pop-Up Shop is in support of Singapore Heritage Society and is made up of contributions by Singaporean design students and established Singapore design studios. 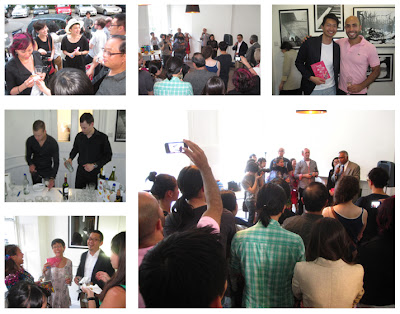 Following the arrival of the Singapore High Commissioner to the United Kingdom, PUSH! was officially opened with a speech from his Excellency and venue sponsors RSP Planet Design Studios and Clara Yee from Creative [SIN]ergy.

The food was particularly popular with the guests, with the most raved about item being the Aranchinese balls created by Singaporean supperclub geniuses Leigh and Shuwen of Two Hungry Girls.

Guests were also particularly fascinated with Iyvone Khoo’s laser installation, Celerity, and one of the guest, lawyer Phillip Hindley comparing it to “Rene Magritte’s surreal little world”.
Posted by creative [SIN]ergy at 23:30