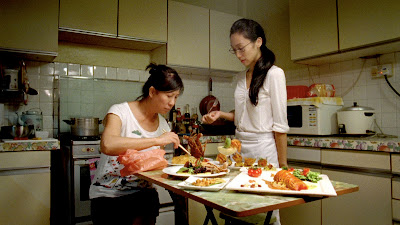 Kitchen Quartet by Nicole Midori Woodford has been selected for the 6th edition of PROJECT: slingSHORT. This year's screening is held in conjunction with PUSH! on Saturday 28th July at 3.00pm.

Synopsis:
A food critic unknowingly alters a young female chef's fate. Her path ironically echoes that of the food critic's son. Both daughter and son, in two vastly different families, uses food as a means to reconcile with their respective estranged parents.
In a food obsessed nation, the power of food manifests in our lives in a myriad of ways. A patronizing food critic unknowingly affects a female chef. Forced to question her culinary career, she re-examines her relationship with her hawker mum while the withdrawn young son of the critic uses food as a means of connecting with his father. The film depicts how the two different families confront their inner selves without them realizing how their lives intertwine.

Creative [SIN]ergy presents, PUSH! (Pop-Up Singapore House). A non-profit project in association with RSP Planet Design Studios, working in partnership with FARM andPlatform 65 and supported by Singapore International Foundation. PUSH! presents an exciting summer of events, exhibitions, and workshops. Showcasing some of the best Singaporean talents from a diverse range of backgrounds including Visual, Literary, Theatrical, Design and Culinary Arts from around the globe in London.
Posted by creative [SIN]ergy at 08:00