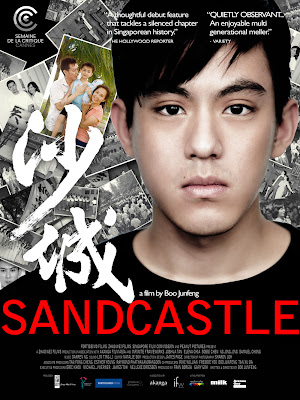 The inaugural edition of [SIN]efest, the UK’s largest Singapore film festival has just announced its final film selection. A total of 4 features films and 2 shorts will be featured in addition to popular new talent showcase PROJECT: slingSHORT.

The festival kicks off on November 11th next month and will last for 3 days until November 13th.

Rising young Singaporean filmmaker Boo Junfeng’s Sandcastle will open the festival. Sandcastle has been one of Singapore’s most critically acclaimed films this year having performed well at Critics’ Week at Cannes in May and currently enjoying an active screening life on the festival circuit. Boo Junfeng, who is curating [SIN]efest, will be in London during the festival to support the film as well as hosting a special filmmaker workshop.