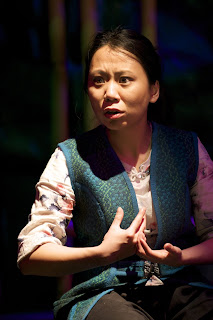 Wed 21 - Sat 24 October 2009 7.30pm
Greenwich Theatre Crooms Hill London SE10 8ES
Click here to book your tickets.
Charmingly offbeat and very funny, Boom is a warm exploration of what makes a home, and what makes us so attached to it once we've made the perfect one.
Singapore 2008. With the economy booming and the demand for land intense, the young, the old - and the dead - are forced to jostle for a space to call their own: a property developer's mother refuses to move from their family home to make way for his new and very profitable apartment block; whilst a psychic civil servant - charged with relocating a cemetery - has come up against the most stubborn corpse yet. 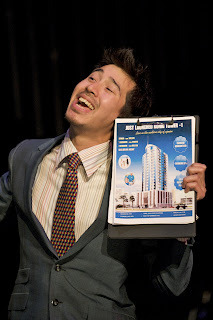 Jean Tay graduated in 1997 with a double-degree in creative writing and economics from Brown University, USA. In 2000, she won 1st prize for Action Theatre's 10-minute Play Competition for the play “The Knot”, which was subsequently selected as a finalist for the Actors Theatre of Louisville's 10-minute Play Contest. She has been nominated three times for Best Original Script for the Life! Theatre Awards, and won for the play “Everything But the Brain” in 2006. In July 2007, she was selected to attend the prestigious month-long International Playwriting Residency organised by the Royal Court Theatre in London, where the concept for the play “Boom” was first developed. Jean has been attached to the Singapore Repertory Theatre as resident playwright since 2006.

Boom was first developed as part of the Royal Court Theatre's International Residency in 2007.

Boom and wave are playing in repertory. Currently on tour nationally then at the Riverside Studios in Hammersmith 10 - 15 November. Booking information at www.yellowearth.org