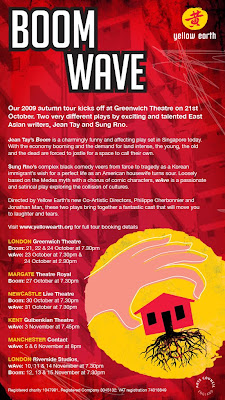 Charmingly offbeat and very funny, Boom is a warm exploration of what makes a home, and what makes us so attached to it once we've made the perfect one.

Singapore 2008. With the economy booming and the demand for land intense, the young, the old - and the dead - are forced to jostle for a space to call their own: a property developer's mother refuses to move from their family home to make way for his new and very profitable apartment block; whilst a psychic civil servant - charged with relocating a cemetery - has come up against the most stubborn corpse yet.

Boom was first developed as part of the Royal Court Theatre's International Residency in 2007.