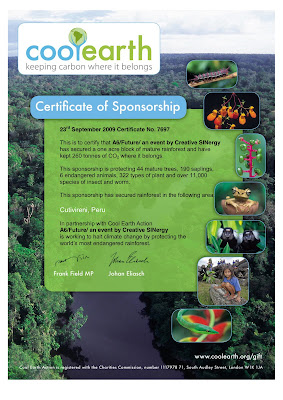 Creative [SIN]ergy presents,
A6 /future/, a collaboration between 22 illustrators from both Singapore and the UK. Supported by the Singapore International Foundation, The Central Illustration Agency and Tiger Beer. A6 /future/ invites these artists to share their thoughts, hopes and dreams about their future through the use of A6 sized postcards.

A6 /future/ is part of the London Design Festival 2009 and has been selected for inclusion in the Icon Design Trail London 2009. The completed artworks will be showcased at the Idea Generation Gallery between 21 - 27 September 2009. The 22 postcards will also be auctioned to raise funds for Envision, a UK registered charity.

Come join us for the Charity Auction Party on Saturday 26th September 2009. Please RSVP info@creativesinergy.com for an invitation.

Working with partners throughout the Amazon, Cool Earth secures rainforest, helps protect it around the clock and ensures communities benefit from keeping the forest standing. Sponsoring an acre of rainforest with Cool Earth challenges global warming.

Cool Earth secures threatened rainforest. We put it in a local trust, and help to protect it around the clock to keep the carbon where it belongs. We employ local people to do the work, helping them to get income from the forest without cutting it down, and make sure the rainforest is worth more standing than cut down.

Rainforest destruction is a massive contributor to climate change. It accounts for as many CO2 emissions as the USA - a staggering six billion tonnes each year.

The simple idea behind Cool Earth is that rainforests are worth much more to the human race left standing, helping to cool the planet, than they are cut down for timber or burnt to clear land for cattle ranching.