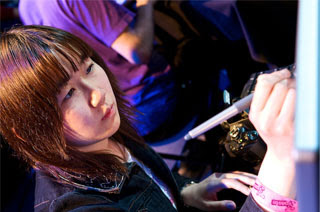 Maria Fung, a self-employed graphic and web designer, won second place in internationally renowned digital design tournament, Cut&Paste, in London on Saturday, 4th April 2009, in the Coronet Theatre.
The London-based designer was the only Singaporean out of the 8 finalists who competed in the main arena, after defeating hundreds of hopefuls through website submissions and a 15-minute 2D digital design test round.

Cut&Paste, which occurs in various major cities worldwide, celebrates emerging talent in 2D, 3D and Motion Design. The London event was filled with a large vibrant young crowd and huge projector screens that monitored each competitor's progress. It was broadcast live on the web to viewers world-wide.

Participating in the 2D category, the competitors had to create artworks based on given themes in 15 minutes using Wacom Cintiq 21UX monitors, without any premade or finished images, or sketches as references. Competitors had to use their own props like cameras and objects instead. Fung emerged second place in the overall competition.

This is not the only achievement she has. During her student days at the University for the Creative Arts, her video works were among the 30 students selected to be screened at the ODEON Student Film Night in Maidstone, in 2005 and 2006.

Less than 2 years after she graduated, Fung already has an impressive client list, including the NHS, leading sports and entertainment company AEG and Royal Holloway, University of London, in addition for working with some of UK's top design agencies such as The Design Conspiracy and Stylorouge, where she contributed some of her design ideas for musician David Gilmour.

The music and video games lover, who describes her style as being experimental and flexible with an illustrative mix of vectors, mixed media and creative digital retouching, has worked for various sectors such as music, games, entertainment, PR, events, publishing and charity.

Fung misses Singaporean food, enjoys cooking, loves dogs, wishes that people will know that graphic design is more than just computers, and that Singapore is NOT in China.

Her Cut&Paste winning entries can soon be seen on www.cutandpaste.com.
Check out her website at www.mariafung.com. 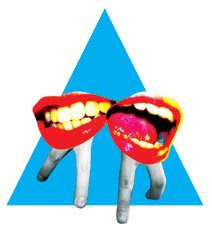 Taking photos of her mouth and fingers, Maria Fung created this 2D digital piece based on the theme ‘Bliss’, in 15 minutes during the test round. The entry won her the enviable place among the 8 finalists who competed in the main arena.
Posted by creative [SIN]ergy at 07:39